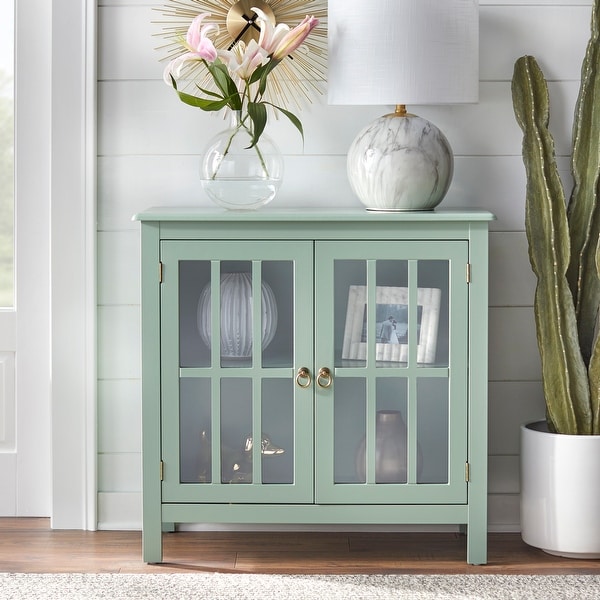 Nice cabinet, very colorful and durable we own this cabinet over 2 years and still looking like new.

Organize your books, trinkets, and videos in this Portland Cabinet by Simple Living. Crafted with glass doors and loop metal pulls, this cabinet brings a classic style to your family room, and it's available in several colors for versatility. One fixed shelf offer two compartments for ample storage space.

This product will ship to you in one (1) box

Leaves our warehouse in 1-10 business days. *

Items must be returned in new or unused condition and contain all original materials included with the shipment.
More Details

We proudly offer international shipping to over 180 countries and several US Territories. Click here to see a list of supported countries by region. Please note, the estimated delivery timeframe displayed at checkout combines the time to process your order, transit time to our International export facility plus the processing time to ship it outside of the United States.

Additional fees may be required by the carrier for deliveries to remote shipping locations.

For your protection, all orders are screened for security purposes. If your order is selected for review, our Loss Prevention Team may contact you by phone or email. There may be a two business day delay to process your order.

** Most Oversize orders are delivered within 1-4 weeks. Some orders may take 6 weeks to be delivered.